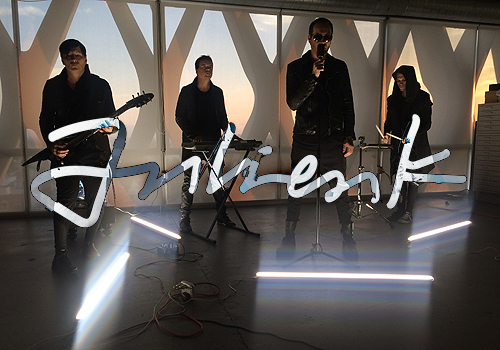 Having successfully crowdfunded the release of the band’s latest single, “Mannequin Eyes” as a special teaser for the upcoming Nightlife in Neon, electro/rock band Julien-K has unveiled the music video for the single via the fans.
According to guitarist Amir Derakh, “What happened with ‘Mannequin Eyes’ was that I actually had the idea for that video a long time ago, but we never had a song; I didn’t know what the song was until we wrote it…” The music video for “Mannequin Eyes” is among the many rewards offered to those who contributed to the IndieGoGo “Lightning Campaign,” a series of what vocalist Ryan Shuck refers to as “really cool curated content that is kind of put together in a really awesome way.” Among the rewards are posters, the “Mannequin Eyes” single (with a corresponding B-side remix by The New Division) in CD and cassette formats, as well as a USB drive containing the video, photos, and other exclusive content.

Drawing on a visual style befitting the song’s electro/rock ambience, the video – shot and directed by Bobby Hewitt (former drummer and band mate of Derakh and Shuck in Orgy) – features a retro futuristic aesthetic reminiscent of the high fashion and glitzy sci-fi of the ’80s. Wrought with images of android-esque women driving down the neon-lit city streets in a Deloreon, recalling the neo-noir of Miami Vice mixed with the techno grit of Blade Runner and the iconic vehicle from Back to the Future, intercut with the band performing in steely blues and harsh flourescent lighting, the visual character of “Mannequin Eyes” meshes seamlessly with the “wide-eyed look in the ’80s song.” The resonant analog synth textures atop rhythmic guitars and Shuck’s vocals alternating between a robotic monotone and an emotive croon lives up to the lyrical and thematic tone, perfectly capturing the bygone decade of excess. And yet, for all of the references to the ’80s, the video and song still feel fresh and polished with a modern sensibility, proving that Julien-K embraces the past without dwelling in or on it.

And if you want to see it… it’s up to you, the fans! Julien-K has made clear that you are responsible for the group’s continued success, and ReGen Magazine is proud to play a small part in this endeavor by presenting the music video here for our readers – but it’s up to you, the fans, to share it out and get people watching and listening…

“‘Mannequin Eyes’ is definitely a taste of Nightlife in Neon,” Shuck said of the song and how it represents the upcoming second chapter of California Noir. “It is a great new, fresh view of Julien-K, and we’re definitely using it to see if fans dig it and what we’re doing… because that’s Chapter Two.” With the album expected to see a release in 2016, the ‘Mannequin Eyes’ single and music video does well to build the anticipation for what is sure to be one of the year’s most exciting and edgy records.