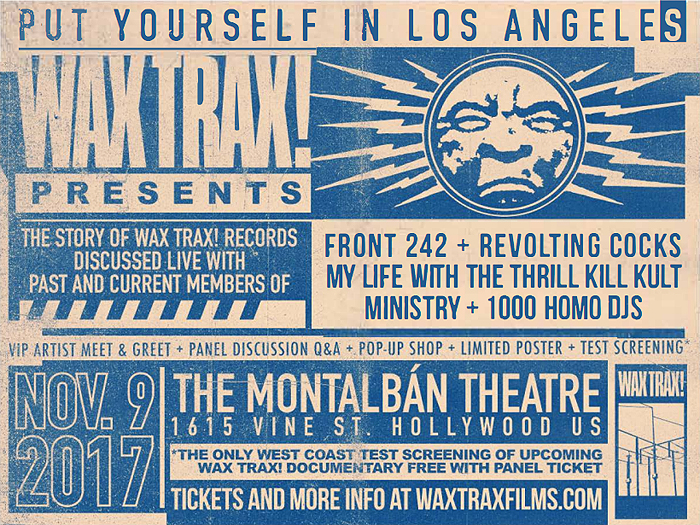 Having now had some time to process the singular experience that was the Thursday night of November 9, 2017, this writer finds that the words continue to elude him. Taking place on this night at the Montalbán Theatre on Vine Street in the heart of Hollywood was a screening of a documentary several years in the making, funded via Kickstarter campaign and chronicling the history of what began as a small record store in Denver, Colorado and would later move to Chicago and become what prominent Chicago artist/musician Jim Marcus referred to as “The start of it all.” Founded by Jim Nash and Dannie Flesher, WaxTrax! Records is virtually synonymous with the multicultural and free-thinking attitudes of the post-punk and industrial music scenes in the ’80s and early ’90s, championing an independent approach to recording and releasing music whose influence can still be felt in modern music. Put simply, what we now know and think of as industrial music is due to the efforts of Nash and Flesher to expose audiences to the sound of the underground, to provide an alternative to the alternative, to bridge the social, political, and geographical divides and create a truly artistic community; as ReGen associate and Digressions co-host John Galope states, “WaxTrax! gave me cultural identity.” 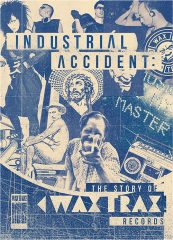 As stated, it’s difficult for this writer to find the right words to convey the significance of this event, a screening of Industrial Accident: The Story of WaxTrax! Records. It feels senseless and, quite frankly, a disservice in my estimation to ReView the documentary in any aesthetic terms; it’s not the sort of thing one can judge in such a fashion. Sure, there are the requisite interviews with the numerous musicians associated with the label – members of KMFDM, My Life with the Thrill Kill Kult, MINISTRY, Front 242, Revolting Cocks, Front Line Assembly – along with a few higher tier artists like Trent Reznor and Dave Grohl to comment on WaxTrax!’s influence on their music. Sure, the relative chronology and various stories and anecdotes were detailed with a certain level of visual and almost literary panache that matched the anarchy and artistry of the subject. Sure, one could criticize the absence of a doubtlessly great amount of material in the final edit (if this actually was the final edit), which could be excused for the possibility that they might end up collected in a DVD supplement… something addressed in the Q&A session that followed the screening. Sure, one could write about Industrial Accident and attempt to offer a synopsis and analysis of the documentary in these terms.

But this was not just the history of a music scene or a record label, told dispassionately and objectively to garner the accolades of critics with little more than an intellectual investment. As stated by director Julia Nash (Jim Nash’s daughter) in the Q&A, the movie was created for the fans, the throngs of people whose lives were profoundly and so positively affected by what Jim Nash and Dannie Flesher accomplished, and to give them more of an understanding of who they were. And if one must judge its merits on those grounds, to assess whether Industrial Accident does, in fact, achieve this goal, those of you reading may rest assured that it does… and more! The movie begins with footage of Nash and her husband – co-director/co-writer, and graphic artist Mark Skillicorn – in 2010, shortly after Flesher’s death, entering a garage filled with the remnants of the WaxTrax! Records store, including one of the original storefront signs. Since 2014, the pop-up store has emerged mainly at the Metro in Chicago as part of the annual ColdWaves events to once again release these items to the public; indeed, the pop-up store was present at the Montalbán Theatre, full of likeminded people from various walks of life engaging in a sense that this wasn’t just an event to buy merch… this was a gathering of that community, still in existence and still holding strong. To see this and then to view the movie’s introductory sequence and not feel a sense of awe and heartfelt appreciation would be impossible. 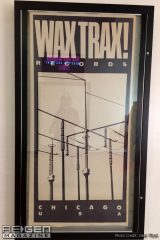 To watch the movie and later realize that it was indeed Jim Nash’s ex-wife, Julia Nash’s mother, Jeanne Payne, the nice lady who crossed my name out on the guest list and welcomed me and my companion to the venue; to realize that the original staff and employees I’d seen in the movie like Nancy Winfield, Sean Joyce, Liz Denis, Larry Crandus, and Andy Wombwell were indeed the people I and the other attendees were speaking with and purchasing items from in the pop-up store just before the movie; to notice finally that Mark Skillicorn himself was who I’d conversed with via e-mail to arrange ReGen‘s press pass to the event; to see members of the ColdWaves crew and musicians from bands not on but inspired by WaxTrax! like 16volt, Collide, The Aggression, Seven Factor, and CHANT, to name a few… all of this and more conveyed the sense that this was not simply an artistic, musical, cultural community. This is not just any scene. This is truly a family, and one whose ties run deep. Imagine, if you will, going to a family reunion and among the familiar faces meeting for the first time relatives you didn’t know you had up to that moment. Imagine also that at this event are people who had a powerful impact on your upbringing, yet you were never truly aware of them until then. Such was the feeling that being at this WaxTrax! event gave this writer, with the full effect barely sinking in as I write this several weeks later, the memories still undiluted in a jumble of emotions.

To top off the night was the aforementioned Q&A moderated by actor/DJ/musician and WaxTrax! fan Lance Robertson – a.k.a. DJ Lance Rock of Yo Gabba Gabba!… WOW! Once again, it’s difficult to sufficiently express just how poignant and affecting the experience was to see Julia Nash joined by Chris Connelly (Revolting Cocks, MINISTRY, Fini Tribe, etc.), Paul Barker (Revolting Cocks, MINISTRY, Lead into Gold, P.T.P., etc.), Richard “23” Jonckheere (Revolting Cocks, Front 242), Marston “Buzz McCoy” Daley and Frankie “Groovie Mann” Nardiello (My Life with the Thrill Kill Kult), and label employee and radio promoter Andy Wombwell. The level of admiration and affection, respect and reverence was absolutely palpable, both on and off the stage, as audience members had the opportunity to ask their questions for each panelist to share stories, memories, impressions, and reflections… and goddamn was it hilarious!

I’m not going to include a litany of the various topics discussed; best simply to watch the video captured and posted by Seven Dunbar and included in this article with his kind permission… and even that is only a substitute for having been there, which this writer must once again state was a deeply affecting experience. However, I will end by giving credit to one audience member by the name of Jed (apologies to this person if that is misspelled) for pointing out that this was not just a scene, but a family, and asking the question, “If you could choose one word, why are you here right now?” Words like “love,” “life,” “honor,” and “respect” were among the answers, as well as Wombwell’s three word response of “Jim and Dannie.” But in this writer’s opinion, the most powerful response (or at least the answer that affected me the most) came from Chris Connelly, saying in his inimitable Scottish accent and motioning to everyone on and off the stage, “Blood. My veins and our veins.”

If that’s not an ultimate expression of love and reverence, what is?

Video and screenshots by Seven Dunbar of I AM SEVEN