The line stretched around the block for IAMX’s first U.S. show of the Alive in New Light Tour, hot on the heels of the band’s latest release. A mixture of longtime loyalists and curious newbies eagerly mingled while waiting to be let in from the cold. Washington, DC’s Rock & Roll Hotel is a perfect venue to host IAMX – large enough to handle the crowd, but intimate enough to still feel engaged. 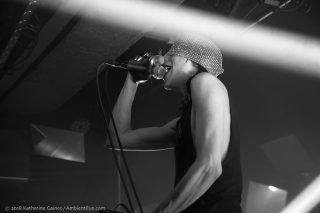 After about two drinks time, Chris Corner and company took the stage to deafening screams. Dressed in skintight black leather and sporting a bejeweled blindfold, he quickly launched into his latest single, “Alive in New Light,” the atmosphere aided by a series of intricate light beams and mirrors. IAMX live is always an interesting beast as, rather than trying to duplicate the songs exactly, each track is retooled for live performance. “Alive in New Light” was no exception to this, giving a lot of reverence to Jon Siren’s superb drumming. 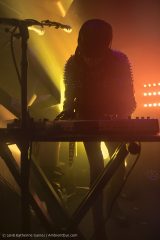 Corner made his introductions after this, sounding genuinely taken aback by the rabid crowd and showing the delight on his pale face. “Break the Chain” followed, the crowd remaining somewhat subdued during the introduction before cheering at Corner’s huge, soaring vocal in the chorus. “I Come with Knives” and “Happiness” brought the crowd to a fever pitch, egged on by keyboardists Sammi Doll and Janine Gezang (who also provided backup vocals), while “Stalker,” a track that features Kat Von D on the record, fell a little flat on the live crowd, with a noticeable downturn in energy and screams, although “Stardust” began to win the crowd back, with Corner confidently commanding the stage and manipulating the light beams with a series of mirrors. 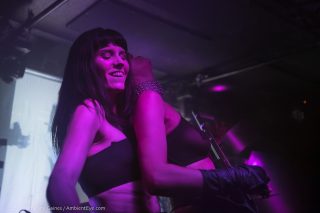 “Exit” followed, bringing the energy down a bit again, this time from engagement rather than disinterest as most of the crowd seemed wrapped up in the atmospheric and moody track. Clearly a crowd favorite, “North Star” followed with fans belting out the chorus and cheering throughout. At this point, Corner again chatted with his adoring fans and introduced his live players to a sea of applause before kicking off the throbbing dance track, “Body Politics,” the crowd swelling and dancing along to the sexually charged rhythm. This energy was present through “No Maker Made Me” and reached a fever pitch for a heavily retooled version of the classic “Spit It Out.” 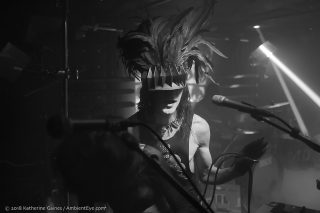 The band thanked fans and left the stage to thunderous applause and screams, with few in doubt that an encore was on its way. After a short break, Corner and company returned to the stage with a pair of vintage IAMX tracks – “The Alternative” and “Kiss + Swallow,” which retained the delight of the audience. An intense ballad, “The Power and the Glory,” with its massive vocals, brought the encore to completion, the band once again expressing thanks and exiting the stage. After another brief recess, the band returned for a second encore. 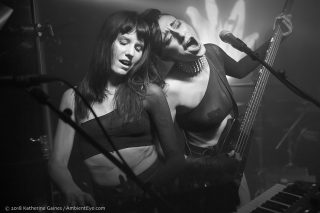 A humorous moment with incorrect backing tracks had Corner joking with the crowd and confessing he’d imbibed a good bit of vodka, remarking, “Just pretend I didn’t come out for a second,” before exiting the stage to correct the issue. After a bit of fumbling, “Mercy” began and he sauntered back onto stage. The track, not played live for many years, was not seamless as Corner exclaimed, “You’ve got to help me, darling, I can’t remember all the lyrics,” but the crowd didn’t seem to mind, for these kinds of human moments being a huge part of why IAMX has such a unique relationship with fans. The band, looking exhausted and proud, said its final goodbyes and wished the audience well before departing the stage a final time.

After the show, the mood was joyous. Fans and friends mingled and discussed the show, as well as the latest release. Some were disappointed with the setlist relying so much on new material, but most seemed to agree that the performance was superior. New fans seemed elated, the band having clearly lived up to its reputation. Many diehards looked as though they’d had dinner with old friends (or maybe checked in with their therapist). IAMX has reached near legendary status, both as a recorded and live act, and with performances like this, it’s doubtful that is set to change any time soon.