Many bands go through what is often referred to as the “classic” period; that era when everything about that band seemed right and true. The people in the band worked well together in spite of (or perhaps even because of) internal tensions, the results yielding some exemplary music that reached a wide audience that would propel the band in that particular configuration to the heights of creative and critical acclaim. For the industrial metal juggernaut known as Ministry, that era seemed to be the near decade lasting from 1987 to 1996, when Al Jourgensen (then going by the nickname of Alien) and Paul Barker would be the dynamic duo of destruction and debauchery. Producing under the pseudonyms of Hypo Luxa and Hermes Pan, this period remains in the hearts and minds of audiences around the world as Ministry’s pinnacle thanks to the success of such albums as The Mind is a Terrible Thing to Taste and Psalm 69: The Way to Suck Seed and Suck Eggs (a.k.a. ΚΕΦΑΛΗΞΘ). And like all great rock & roll success stories, it was this period that saw the band in the depths of chemical excess, with Jourgensen’s alcoholism and heroin addiction especially becoming the stuff of musical lore. Sounds like the perfect recipe for a rockumentary of epic proportions, right? Filmmaker Douglas Freel certainly thought so as FIX: The Ministry Movie presents his vision of a candid and unfettered look at Ministry at its peak during those years preceding the band’s paradigm shift toward a primarily heavy metal sound. 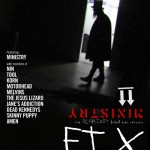 The ultimate dilemma with such an undertaking is how to make the film stand out from the plethora of rock documentaries available on numerous bands and artists, many of which follow the same model featuring live clips, backstage footage, interviews and commentary from band members, colleagues, and the odd fan or two. So, how does Freel – with Jourgensen and Barker serving as executive producers – manage to keep FIX interesting and free from the trappings of formula and cliché? The answer: very much in the same way that Ministry’s music has remained relevant… by not giving a fuck! Indeed, all of these ingredients are present in FIX, but are from the get-go presented in a manner one could almost consider slapdash for its complete disregard for any logical narrative – chronological or otherwise. While some may find this to be a questionable approach, one that might make the viewing experience a tad jarring, it does lend itself to the inherent chaos that has surrounded Ministry’s music and the band itself, the focus shifting from one topic to the other with little rhyme or reason. In one moment, record company executive Howie Klein is relating his attendance of a sporting event in which Jourgensen led the crowd in a chant against the rival team’s goalie, incurring the sportsman’s subsequent breakdown. In the next moment, KoRn vocalist Jonathan Davis discusses his own band’s inability to coexist on the same tour bus, in contrast to Jourgensen’s previous statements of the most fun tours the band ever embarked on being those without the benefits of professional equipment and/or personnel. 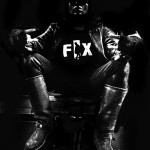 For this, FIX is as polarizing a film as Ministry’s music, with some likely to find it a pretentious and incoherent jumble of rock star anecdotes and disjointed clips, some of which seemingly have little to actually do with Ministry. However, it is this incoherency that actually gives weight to the impact that Jourgensen and co. have had on the music scene, achieving a higher order in the midst of anarchy, filtered through a soundtrack of the band’s best known songs and countless snippets of live shows. As Lemmy Kilmister of Motörhead states early in the film, “I quite liked them; they were funny.” Watching the cornucopia of backstage and on-the-road footage featuring ex-members Louis Svitek, Zlatko Hukic, Duane Buford, and Rey Washam reminiscing on their experiences in one of the industrial music scene’s foremost entities, along with appearances by Trent Reznor, Maynard James Keenan, Jello Biafra, and numerous others (including the late great William S. Burroughs and Timothy Leary), no statement could be truer; there is nary a dull moment throughout the film, free from the conventions of the rockumentary to place a sullen tone on the group’s lowest points. FIX strives to give the viewer a truly internal look at the mindset of the Ministry mania. Interestingly enough, as the film’s website and YouTube channel feature even more material not included on the DVD, it’s a wonder just how much footage was excised that might have added to the overall feature. 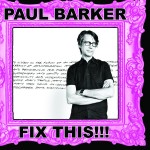 However, if the film alone is not enough to sate the fans, the deluxe package includes the Fix This!!! album from former Ministry member Paul Barker. While not an actual soundtrack to FIX, it does provide a worthwhile accompaniment that demands to be heard. In many regards, it is essentially Barker’s solo debut, presenting a refined mechanical rock sound that recalls the gritty melding of styles that defined classic Ministry. Beginning with Taylor Momsen’s bluesy wail atop a barrage of noisy guitars and battering drums in “Victory,” before moving onto the atmospheric mantra of “reSpite,” Nivek Ogre’s distinct voice slithering amid chugs of dark swirls of guitar and synthesizer feedback, and Chris Connelly’s acrid mix of spoken word and soulful croon atop abstract waves of thrumming bass, strident percussion, and psychedelic guitars on “Evangelical Sound Barrier” and “Heavy Water,” Fix This!!! is sure to please fans who have longed for the more experimental all-or-nothing approach of old. Bridging the generation gap, Maynard James Keenan’s Puscifer offers up a pulsating, rather noisy remix of “All the Pretty Swindles,” while Barker himself remixes the classic “Psalm 69” into a nightmarish mélange of distorted electronics, eschewing the original version’s caustic industrial metal grime in favor of something more insipid.

Is FIX: The Ministry Movie a perfect feature? Perhaps that is up to the individual viewer to decide, but credit must be given to Jourgensen, Barker, and Freel for the attempt to assign some semblance of sanity to the whirlwind of rock & roll excess that was Ministry. As Trent Reznor states in the film, “They set the bar that high,” and FIX does well to showcase that. For longtime fans, this is a must have. For those of more casual, less discerning taste, this film is worth a viewing as an oddity and hardly the most essential or comprehensive visual document of Ministry’s history.

Purchase at…
The FIX: The Ministry Movie Website
Amazon.com