The waves of cold air continued to flow through the Windy City on this sunny Saturday evening of September 30, beginning the second of three nights of ColdWaves VI. One of the many heartening aspects of this particular gathering of the industrial music scene is not only the diversity of music but that of the crowd as well; fans of experimental and atmospheric industrial and exploratory sound mingle with those that prefer melodic and lyrical expression or even the more primal urges to simply move one’s feet and shake one’s fists on the dance floor. With this year spanning three nights and offering the largest and one of the most varied artist rosters ever, ColdWaves is an opportunity not just for musical discovery but also for friends old and new to share in this industrial community while paying tribute to the memory of fallen loved ones. Having spent the first night stricken with an aberrant illness, this writer was thrilled to return to The Metro the next night, energy recharged and thrilled to see familiar faces from years past, ready to partake in the musical blitz about to take place. 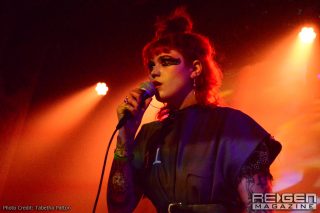 First to take the stage was Chicago’s own Grün Wasser, and like Replicant the previous night, the duo set the tone for the evening’s festivities with heavily ethereal synth-laden grooves. Despite the band’s somewhat frumpy and utilitarian attire akin to futuristic sanitation workers, vocalist Keely Dowd was especially striking, adorned in fiery red hair and dark eye makeup that was somewhat evocative of Liquid Sky mixed with Blade Runner – imagine a physical merging of Pris’ basic pleasure model with Zhora’s kick murder squad lethality if portrayed by Siouxsie Sioux. With slightly robotic movements that appropriately matched her vocal interplay with the music, handled effectively by keyboardist Essej Pollock, there was a strange android quality to Grün Wasser’s presentation of gritty electronic dystopia not dissimilar to the otherworldly audio surrealism of The Knife crossed with Laurie Anderson. In other words, a suitably arresting opener. 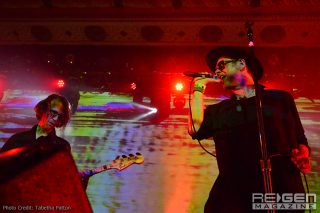 Some would say, and this writer would certainly be among them, that ColdWaves would not be the same if Chris Connelly and Paul Barker, two of the scene’s most revered and respected players, were not present. As alumni of the Revolting Cocks and having each marked their own territory with Barker’s Lead into Gold and Connelly in Cocksure and Damage Manual, the pair unveiled their latest collaboration – Malekko – to present a new experimental form of electrified rock driven by the insistent beats and shrill electronic drones of Joshua Holley. Barker’s resonant, fluid bass lines coupled with the crystalline guitars of Peter G. Holmstrom make for a sublimely organic complement to Holley’s electronics, while Connelly brings his trademark Scottish brogue with the kind of seething supercool swagger that has made him a singular musical personality – at once melodic and aggressive, with he and Holmstrom donning wide brimmed hats appearing as cowboy gods of industrial legend. Still a fledgling act, but with the bravado of experienced veterans hungry for new challenges, Malekko is sure to be delivering some of the scene’s most exciting new music in the foreseeable future. 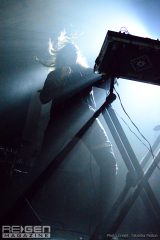 Few artists and bands can readily match the feverish intensity and stylistic bluster of Skinny Puppy or the cybernetic austerity of Front Line Assembly, and while several have made the attempt with varying degrees of success, Brooklyn’s Statiqbloom effectively blends the two. Fade Kainer and Denman Anderson exhibit a straightforward, no nonsense attitude and presentation as two leather-clad longhaired keyboardists, the band readily bearing an economy of sound and motion that allows the music to speak for itself. What little the pair possesses in visual intrigue is compensated by an abrasive and punk like stage presence that in tandem with the caustic beats and scathing bass lines, achieves for this writer what many seem to admire about Dead When I Found Her or Youth Code. 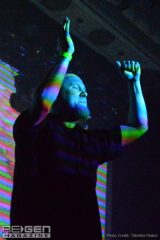 Evolving from the noisier and more experimental sounds of the genre’s beginnings, EBM and industrial dance may have gone on to become the most enduring and arguably most popular derivation, rearing its influence even on the grittier and more acerbic styles that ColdWaves draws its name from. The futurepop trends of the late ’90s and early ’00s proved to be a fruitful if polarizing period for electro/industrial music, with many enjoying the fusion of trance and synthpop modes with the harder textures of EBM and industrial. Among the more prolific acts to emerge from this time is Assemblage 23, and though his more danceable and melodic style might have seemed a touch out of place, Tom Shear and his cohorts provided quite a bit of respite; no less dark in its lyrical themes, and just as intelligent in their delivery, but giving the crowd something to move to without thrashing their heads off, with modern dance floor classics like “Naked” and “Drive” receiving quite the response. Though this writer had not seen Assemblage 23 in over a decade, the band proved to be one of the most straightly fun acts of the whole event. 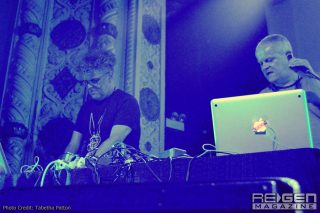 Continuing the stream of hard pounding EBM beats was Severed Heads, returning to the ColdWaves roster once again after two years. A pioneering entity in the scene for blending proto-techno electronics with ambient passages and lyrical synthetic phrases, the duo of Tom Ellard and Stewar Latorre appear as sonic scientists conducting live experiments in sound design and manipulation, showcasing a plethora of tracks remixed and reinterpreted from across Severed Heads’ extensive discography. From behind their arsenal of laptops and wires, the band was hardly hidden to allow their expressions of elation and exhilaration to be seen by the raucous crowd; it was quite a delight to know there were human beings behind the emanations of audio bombast. Of course, this didn’t prevent Severed Heads from once again employing a dynamic visual tour de force with video projections and animations that offered an illusory feast for the eyes that proved as frenetic as the pulsating electronics. 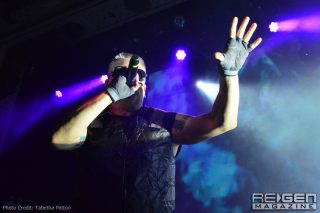 Hailing from Belgium, Front 242 remains after three-and-a-half decades one of the most recognized names in all of electronic music, drawing what was perhaps the largest crowd of the whole three night event; whether your fancy is hard industrial, techno or rave, or more intelligently structured and experimental electronic music, Front 242’s appeal is among the most widespread and far reaching. A slow buildup of fog and shimmering lights, the slow drones of deep synthesized bass, and the vicious anticipation of what was sure to be a frantic and frenzied performance from the purveyors of art and strategy. Keyboardist Patrick Codenys and drummer Tim Kroker, donning ominous black masks, took their positions behind their instrumental arrays as sampled voices howled through the speakers. A pulsating bass line gradually appears, and as “Happiness” begins the set, vocalist Richard 23 comes dancing onto the stage, proudly declaring as he points to his Chicago flag tattoo, “It’s good to be fucking home!” Still evoking the MC vibe and dancing up the storm, 23 riles the crowd up with every second, clearly intent on not allowing his age to slow him down as he shows all the vigor and vitality of a young rocker in his prime. 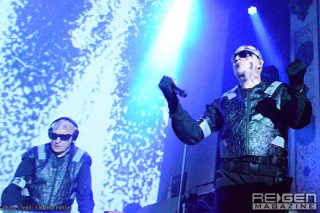 Main vocalist Jean-Luc De Meyer soon joins, and the paramilitary musical unit delivers an onslaught of veritable hits, from the brazenly sexual “Body to Body” to the blistering menace of “Moldavia,” from old tracks of yesteryear like “Take One” and “Commando Mix” to later favorites like “Together” and “Religion,” and of course, “Headhunter” leading the crowd in one of the catchiest choruses in all of modern music. Credit simply must be given for Front 242’s devotion to synthesized exploration and reinvention, reinterpreting music from across the band’s repertoire with new sounds that remain faithful to what audiences have come to know and love about the group, topped off by one of the most intense light and video shows ever produced. Adding to the poignancy of the band’s presence at this or any ColdWaves event is the high regard Jamie Duffy held for Front 242, making each song a heroic declaration of emotional power and solidarity. As with the previous night, the neighboring Smartbar held an after-show with Bombardier and End.user showcasing their own performance and DJing skills with an acidic barrage of breakcore beats and metallic atmospheres, bringing the second night of ColdWaves VI to a marvelous close.

As previously mentioned, it becomes increasingly difficult to find words that can adequately or effectively convey how important ColdWaves is, not just to honor the memory of Jamie Duffy and those artists whose demons consumed them to such a fatal degree, but also to reinvigorate the passion and the adoration those of us still here have for this industrial scene. Past, present, and future collide in a fervent spectacle that reminds everyone in attendance that none of us are as alone as we feel, that every dark thought we have is shared by everyone in the room; as Jim Marcus continues to espouse during his addresses to the crowd during the raffles and the segues between bands, ColdWaves exists so that nobody should ever have to let go of a friend or loved one too soon. It remains in this writer’s mind the truest expression of what Jason Novak and his associates sought to achieve in memory of Jamie Duffy… and there’s still one more night to go!