Five years after the departure of Jamie Duffy, the sixth entry in the Chicago ColdWaves event perhaps bore some of the deepest scars in the fight against depression and suicide. As ReGen associate John Galope had stated in the Digressions podcast, “dark music for people with dark thoughts,” more than adequately describing the varying styles of industrial, goth, electro that encompass this music scene. But this year, the reverberations of that statement extended into wider territory with the loss of Chris Cornell and Chester Bennington to the ravages of depression and suicide; the effects of two of modern music’s most celebrated artists could be felt both in the mainstream and underground scenes. As well, this year saw the scene lose another one of its own, with Tonya Pugh – a.k.a. TZA – of Dismantled and Aerodrone, making the significance of ColdWaves’ efforts with the likes of Darkest Before Dawn to bring support and reinforcement to those whose dark thoughts overwhelm and threaten to destroy them all the more palpable and poignant. Spanning three main event nights, a kickoff event, and two after-shows, ColdWaves VI was the largest undertaking organizer Jason Novak and his team had worked to accomplish. Virtually all points on the spectrum of the underground music scene could be found in the numerous acts that performed, with ColdWaves once again bridging the generational and stylistic gaps by showcasing newer groups and artists alongside longtime heroes that shaped the scene in its formative years.

This year’s kickoff show took place on Thursday, September 28 at The Empty Bottle, featuring performances by dark electro/synthwave act Gost, experimental industrial artist MC 900 Ft Jesus, and sets by DJ Bud Sweet. Alas, while ReGen was unable to attend this show, it already perfectly exemplified the creative spirit of ColdWaves, placing relative newcomers alongside veterans to showcase the diversity the scene has to offer. As well, the kickoff offered a nice preview of what audiences can expect as MC 900 Ft Jesus will be among the main performers at the ColdWaves L.A. event taking place in November, while Gost subsequently embarked on a North American tour to bring its frightfully enticing electro horror show to the masses.

The weather in Chicago had been rather warm (perhaps unseasonably so for the Windy City), enough that Riveting News joked that the heat wave was sufficient for ColdWaves to be canceled. Friday, September 29 comes around, and suddenly, the Chicago winds hit and ColdWaves lives up to its name as the crowd forming around the Metro and the G-Man Tavern grew in size and anticipation. The doors open, and the patrons enter enthusiastically to find their spots on the floor, share some drinks and reacquaint with old friends, and make or plan some purchases at the merch booth, with WaxTrax! Records once again taking its place as a prominent vendor and a reminder of the scene’s beginnings. Though this writer was afflicted with illness, arriving at the venue rather pale, cold, and feeling less than 100%, I was not about to let this diminish my enjoyment of the night’s proceedings. 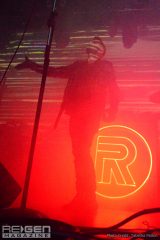 A neon red “R” logo adorns the stage, the lighting a haze of steely blue and ultraviolet to evoke a cybernetic atmosphere, and Replicant starts the night off. Despite the name, the Chicago trio showcased a vibrant and organic musical blend that takes the conventions of ’80s inspired synthwave and adds a touch of muscle and energy with resonant guitar and Jordan DeLay’s gritty bass lines, topped off by the melodic, crooning vocals of Garrett Vernon like the emotive cries of an android in search of humanity. Cyborg chic at its finest, Replicant began ColdWaves with a cinematic trip into the dystopian nightmares of the past, offering an alluring respite from the grim realities of today and setting the tone for the next few nights. 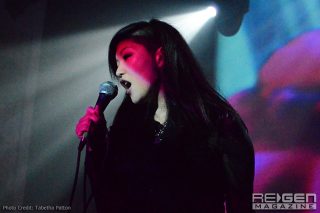 Since the band’s last appearance at ColdWaves III, ∆AIMON has remained somewhat quiet, having released little more than a few remixes since 2013, while Brant Showers has been focused on SØLVE and other projects. However, returning to ColdWaves VI, ∆AIMON proves to be a singular entity that is making strides beyond the witch house formula that had generally defined much of the group’s initial appeal. Darkly mysterious and ethereal, the interplay between Brant’s male gothic croon and Nancy’s feminine ghostly wails in tandem with shrill electronics and sparse but powerful beats makes for a ritualistic ambience. The lyrics act as an incantation to invoke musical spirits that float in the haze of fog and stark lighting; even if one is not a fan of witch house, ∆AIMON’s presentation is a visceral and inviting experience. 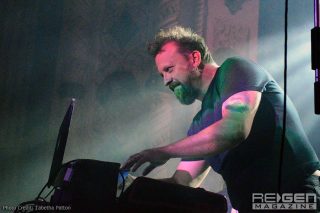 A slinky ambience resonates through the speakers, the clamor of guitar harmonics, and Acumen Nation launches into a pummeling cover of Godflesh’s “Xnoybis.” Perhaps no other band could better elicit the specter of Jamie Duffy than Acumen Nation, as his longtime band mates and brothers in arms laid down an audio assault of vicious industrial/rock and metal; as ever, the interplay between brother Jason and Ethan Novak, drummer Dan Brill, guitarist Brian Elza, and bassist Eliot Engelman was as tight and as incendiary as if Duffy was still sharing the stage with them. The band’s onslaught of drum & bass, industrial, and metal remains unparalleled and as furious in the live environment with gems like “Just a Bastard” and “If You Were” continuing to send the audience into a fervent frenzy. Despite his absence, it could be felt that Duffy is smiling down on Acumen Nation. 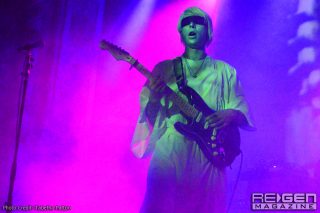 From one form of intensity to another, the next three groups of the evening offered up a taste of the current wave of retrofuturism in Los Angeles, with Drab Majesty and Cold Cave being an especially striking pair to transport the crowd back in time to the darkwave romanticism of the ’80s. Drab Majesty presented a more experimental and esoteric sound and visual style; with Deb DeMure and Mona D both possessing an appearance that might resemble an Andy Warhol fever dream, a pair of haunted silver/white robed figures on a starkly lit stage creating a rich tapestry of sonic strangeness. The chiming tones of DeMure’s black Fender Stratocaster filled the air in a manner reminiscent of mid ’80s Killing Joke, but with an almost bluesy and serenely leftfield vibe more akin to the likes of Swans or The Legendary Pink Dots. 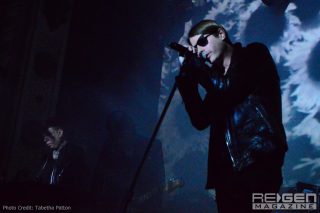 Darkly emotive new wave melodies and goth/rock hooks clashed with a psychedelic and provocative resonance that was as charming as it was unsettling, making Drab Majesty a standout act. In a similar fashion, Cold Cave exuded a sense of gothic cool the likes of which surely recall in the minds of many the early days of The Mission or The Sisters of Mercy, with vocalist Wesley Eisold being especially striking in his shades and leather jacket, belting out his affecting baritone howls. Stoic and slick dance beats meshed with flailing electronic leads amid walls of distorted guitar made for a marvelous display of slightly trashy, disaffected urban chic. 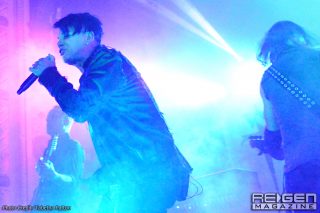 2016 marked the 30 year anniversary of Stabbing Westward, a band whose music continues to resonate with crowds both young and old; having performed sporadically throughout that year, including the ColdWaves V kickoff and Dracula’s Ball in Philadelphia, subsequently touring in 2017 to great aplomb, it was perhaps to be expected that Stabbing Westward would eventually headline a ColdWaves event. The years may be advancing, but with this reformation, as the group continues to gauge the terrain of today’s musical landscape, Stabbing Westward is showing no signs of wear or tear. Performing several hits from across four albums, including such favorites as “What Do I Have to Do?,” “Shame,” “Lies,” “Nothing,” “Save Yourself,” “Sometimes It Hurts,” and “So Far Away,” the crowd engaged the band in a trip through the darkest and most tumultuous of emotions – with the unbridled rage and abandon of industrial/rock mixed with the vulnerability and turmoil of goth, there is a timeless quality to Stabbing Westward’s music that made the band a perfect headliner for the first night of ColdWaves VI. 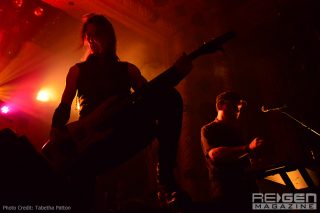 Christopher Hall continues to reach those heights of vocal release, never faltering where many would have surrendered to the ravages of age. The same can be said of guitarist Mark Eliopulos, who unleashes those vicious guitar riffs and noisy solos with the fervor of a seasoned veteran and the vitality of an up-and-comer, while keyboardist Walter Flakus possesses the focus and skill of a sonic scientist, backed by the thunderous rhythm section of drummer Johnny Haro and bassist Carlton Bost. Put simply, Stabbing Westward closed the first night of ColdWaves VI rather brilliantly, leaving the crowd satisfied but far from spent, with many adjourning to the neighboring Smartbar for the after-show as Chicago mainstay act The Gothsicles dished out a high-octane helping of nerdy electro while Curse Mackey DJ’d with his usual taste and proficiency.

Every year, it becomes increasingly difficult to find the words to adequately convey the significance of ColdWaves, what it means to what has been referred to as the “biggest smallest scene,” and with the tragedies of this year, that importance extends far beyond Chicago or the industrial scene. Artists in any medium, and especially music, seem prone to suffer through immense pressures and turmoil – both internal and external – and many simply do not survive; in such dire situations, it is the sense of community and togetherness, the shared love of music that speaks not to a mainstream or commercial sensibility but to the inner struggles we all face that can be heard felt in every second, every laugh, every shed tear, every beat, and every pulsating note at ColdWaves. And this was just the first night, with more to come!