“I can’t believe it’s the fifth year.” Such were the words uttered to this writer at this year’s ColdWaves V in Chicago, the fellow patron’s face bearing the simultaneous traces of astonishment at so monumental an achievement and sadness for the circumstances that brought the event about – the passing of Jamie Duffy, one of the Windy City’s most beloved and celebrated musical personalities. Having earned a formidable reputation on and off the stage, in and out of the studio, Duffy’s life and music helped to shape what we now think of as the underground industrial/rock scene, his skills having served to strengthen both longtime veterans and up-and-coming acts. Carrying on this legacy, ColdWaves has served as a platform not only for new and burgeoning bands to make their mark but also for long defunct legends to reunite and remind audiences of the music that created this scene, with this year’s events heralding some of the most anticipated performances from both ends of the spectrum.

Unfortunately, ReGen was not present for the Kick-Off Party, which took place on Thursday, September 22 at the Double Door, featuring a reunited Stabbing Westward. So momentous was the prominent band’s return that the show had sold out within minutes of its announcement, filling the venue beyond capacity; from the numerous praises of the night’s happenings, this writer got the impression that fainting would also have been an extreme likelihood – if not from the sheer bliss of seeing and hearing the band perform live again, than most certainly from heat exhaustion. Still, with a set list that encompassed many tracks from the band’s four albums, along with a newly reworked version of the 1990 demo “Plastic Jesus,” the crowd got to revel in the nostalgia of their favorite ’90s memories of heartbreak, misery, and passion shouted from the still impressive vocals of Christopher Hall.

Also adding to the first night’s trips down memory lane was EN ESCH with a set list that was sure to please longtime rivetheads, featuring a blend of classic tracks from KMFDM, Slick Idiot, and two of the man’s solo outings, starting with the infectious and dynamic “12345” and ending with a thunderous rendition of “Go to Hell.” And of course, one must give credit to Ganser for opening the entire night with an intense showcase of the Chicago band’s electrified brand of post-punk virulence. Fronted by the ghostly and impassioned voice of Nadia Garofalo, such songs as “Audrey” with its haunting piano-tinged cadence and the grooving bass and dissonant guitars of “Pyrrhic Victory” ensure that Ganser will be a major new force to be reckoned with in the coming years, and one this writer will be excited to finally see onstage.

The following night – Friday, September 23 – at the Metro, just down the street from Wrigley Field and swarms of Cubs fans, the main event of ColdWaves V began. Aside from the first ColdWaves in 2012, ReGen has had the misfortune of arriving too late for the opening band’s performance, usually either catching the last one or two tracks or missing the group entirely; as such, this writer was delighted to have made it in time to see the first band for both nights of the main event. The lights dimmed, the projectors flickering images of dystopian industrial fervor to match the hazy viscera of the opening act… 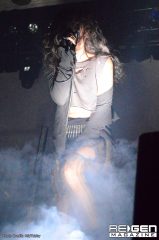 Whereas a band like Youth Code presented a punk like exuberance to its raw brand of electro/industrial, HIDE is the darkly ambient variant that is no less intense or energetic, but more dynamic in its juxtaposition of subtle rhythms and bleak atmospheres. Like the harshest and most enigmatic moments of Skinny Puppy’s Last Rites, the band’s minimalist stage presence is offset by a larger-than-life persona. Augmented by effective strobe lighting, HIDE’s performance created a mystical and haunting visage of a band onstage, fronted by the enthralling and almost shamanistic Heather Gabel, her black hood and mask eventually being stripped away to reveal her intense gaze that reminded this writer of Killing Joke’s Jaz Coleman at his most manic. While it would be fair to say that HIDE might not have been everybody’s cup of tea, it was an auspicious start to the night’s proceedings. 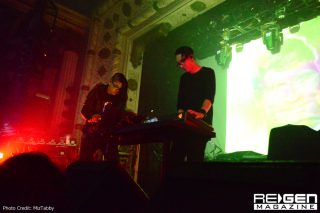 Next to take the stage was Polyfuse with what would prove to be a stellar if bittersweet presentation for an artist who has spent years refining his craft, both in his own outlets and with the likes of Puscifer and Nine Inch Nails. Joined onstage after the first couple of tracks by Surachai, Justin McGrath pounded out a dizzying array of electronic textures that ran the gamut from lushly melodic to rhythmically thunderous, driven by spastic beat structures that put him on par with the best and most experimental acts one might expect from the Tympanik or Ant-Zen camps. The pair showcased a physicality behind their gear that was somehow just as engaging to watch as the most spastic rock band, making this a fine farewell to McGrath’s Polyfuse persona and hinting at greater things to come from his musical future. 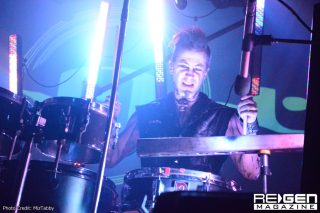 Not unlike Author & Punisher, the argument can be made that once you’ve seen CHANT live, you needn’t ever see the band again, but such thinking would be a disservice to the originality and high dose of percussive power the band displays. Over the course of three albums, CHANT’s brand of sociopolitically charged lyricism has steadily gained traction, backed by an increasingly impressive visual component that celebrates the band’s talents as performers and engages the audience with each show. Fronted by Bradley Bills, whose past experiences drumming for Evil Mothers and Die Krupps at past ColdWaves events has only barely prepared the audience for the full throttle onslaught he would deliver with CHANT – three men onstage, all sharing in creating a bombastic monolith of loud, tribal, industrial/rock, backed by a finely tuned light show that is complex in its construction, yet revels in its simplicity. Even if you’ve seen it before, it’s the most exciting thing to watch live, with songs like “Manifesto,” “Universal,” and “Create to Destroy” really pushing the audience’s enthusiasm harder and heavier with each drumbeat. 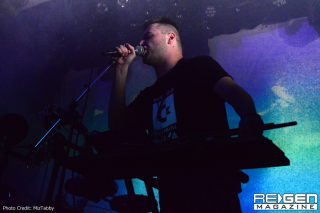 The new project from the dynamic duo of Jason Novak and Sean Payne, Vampyre Anvil’s performance found the two hometown geniuses pushing their harshest and most punishing brand of industrialized rhythms and scathing synthetic atmospheres harder than ever. Not unlike Polyfuse, the energy these two showcased behind their gear was just as virulent a performance as the most out-of-control rock band, the two trading off on synths and percussion, glitching and gyrating their sounds in a manner reminiscent of Acucrack, but taken to a logical progression into a more demented and nightmarish form that still retains the artists’ inherent sense of groove and melody. There are songs amid the noise, the pair’s voices meshing in overdrive to create an insidious and almost subliminal effect, like some demon creeping its way into your psyche, enticing you into its grim clutches… no turning back now; the audience was immediately ensnared in this demonic musical creation. 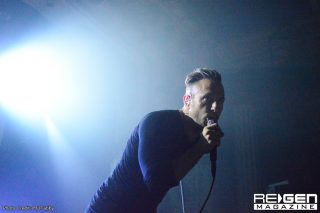 The noise settles back into an audio and visual haze, a cool air of synthesized ambience topped off by the soulful croon of Greg Puciato, and The Black Queen takes to the stage to become a particular highlight of the first night. While the juxtaposition of this band’s more strident, less murky style could have been potentially jarring following the grimy noise of Vampyre Anvil, the groovy rhythms and funky bass lines played well to the band’s soulful pop sensibilities as the beats retained a cold feel that appealed to the industrial setting marvelously. Perhaps the most minimalist visual presentation of the entire night with nary a projection in sight, the band members bathed in hazy light and silhouette, bearing the visage of an ’80s throwback, which complemented the energetic pop of “That Death Cannot Touch,” “Secret Scream,” and especially “Ice to Never,” the latter of which prompting this writer and some fellow patrons to sing the chorus loudly in adulation. It was delightfully understated in its less-is-more approach, but the audience was clearly taken in by The Black Queen’s style. While the songs only marginally deviated from their album versions, the set was excellent in its straightforward showcase. 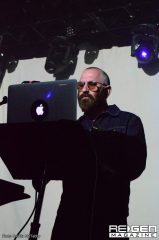 Headlining the first night was the double-whammy assault of veteran acts Clock DVA and Meat Beat Manifesto, both bands featuring their members performing behind laptops – after so many years as trailblazers and pioneers in electro/industrial music, they’ve reached a point of having done it all, which gives both acts a confidence and an assuredness that could be felt in every pulsating bass line and every throbbing beat. Backed by projections, and presenting a hearty helping of their back catalogs, mutated/manipulated/mangled into new forms that are as recognizable as they are unfamiliar, there’s a certain comfort to these two bands simply relying on their history and the crowd’s enthusiasm to revel in that history. They don’t need to showcase any frills or onstage antics. They don’t need to feign youthful exuberance or reckless abandon. They are secure in giving the audience the sounds and songs that have defined and driven part of this scene for three decades. While some – including this writer – may find this a little less than satisfying in the moment, it makes absolute sense in retrospect and is the most logical and most effective presentation one can hope for from Clock DVA and Meat Beat Manifesto. 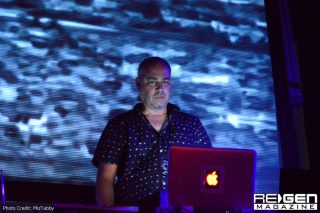 We know the sounds of “The Hacker” or “Soundmirror” (offered here in a mostly instrumental form that almost bears a resemblance to the old dub mixes we know and love from the late ’80s), or “Prime Audio Soup,” the beats hitting hard through the speakers and as infectiously danceable as when we first heard them years, even decades ago. In a way, these two sets offered up a preview of what the DJs would be offering at the after-parties – something akin to a DJ set, but with an aspect of performance and playful dynamism that keeps people wanting to “hear” and “listen” for more… and if your eyes need to be stimulated, there’s plenty being projected on the screens to make up for that. And if that wasn’t enough, the after-party held at the adjoining Smart Bar, featuring DJ sets by DHS and Richard 23, and a live set from Not Breathing, was enough to keep the energy levels amped to the max and keep people’s feet moving and stomping on the dance floor.

It can’t be understated the importance of an event like ColdWaves, not only to celebrate the life and music of Jamie Duffy, but to call attention to the pressures and turmoil that musicians and artist suffer and reinforce the sense of community and togetherness that this underground scene holds. The industrial music scene has been called the “biggest smallest scene,” one that at face value appeals to only a small niche, but that niche is ever growing, embracing the unusual, the strange, the freaks, the artists… those willing to break from convention and dare to be experimental, exploratory, exceptional. Not enough credit can be given to Jason Novak – Duffy’s musical partner and brother – for carrying on the legacy every year, once again sponsored by Kuma’s Corner and Revolution Brewing, and this year with the association of Darkest Before Dawn, a non-profit organization devoted to suicide prevention. ColdWaves continues to give people a time and a place not only to enjoy the music they love, reuniting old favorites and introducing some rising stars, but also to remind everyone that we are not alone, that we are a scene, that we all share in the pain, the darkness, and the joy that leads us to create and enjoy the strange and magnificent art and music that is what we call “industrial.” And there’s still more to come!