Festival events are nothing new, even in a niche scene such as the industrial/electro/goth scene; however, few seem to possess so focused a sense of purpose as Chicago’s ColdWaves. Since 2012, the Windy City has hosted this momentous event as not only a celebration of the life and music of Jamie Duffy, one of Chicago’s most revered musicians and sound engineers, but also to shed a bright light on suicide and the pressures that lead many to take their own lives. With the participation of the Hope for the Day foundation for suicide prevention, ColdWaves has grown from a tribute concert to become one of the most emotionally charged and poignant festival events in the underground music scene. 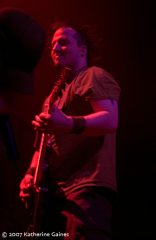 From the start, ColdWaves was different from most other festivals in the scene, heralding a much stronger sense of community with the reformation of several groups long since disbanded or defunct; old rivalries and arguments were laid aside, the fires of creativity lit once again to give audiences a welcome dose of industrial/rock mania as bands like Final Cut, Clay People, Hate Dept., BILE, Evil Mothers, and Die Warzau came together once more in honor of Duffy and the fellow fallen. Younger and up-and-coming acts like The Rabid Whole, 3TEETH, ∆AIMON, and Youth Code would join the ranks in the following years, while the industrial/metal fervor of Fear Factory and Prong the pioneering electro/EBM of Nitzer Ebb’s Douglas McCarthy and Front 242 would leave an indelible mark. While focused primarily on the overarching mantle of coldwave and industrial/rock, ColdWaves has long been demonstrating a propensity toward a wider spectrum to encompass a greater assortment of sounds and styles – it’s no longer just about coldwave, but the overarching spirit of innovation and creativity that is industrial music.
This year, organizers Jason Novak and David Schock seemed to have their work cut out for them more than ever before to make ColdWaves IV as spectacular as the previous entries, staying true to, as Novak once stated, “the stuff of intelligence, taste, and a great attitude towards edgy and dark music, crossing through different styles and sounds, all the while respecting a common theme.” On the surface, the lineup of artists for this year’s event was perhaps the most darkly diverse audiences had yet seen; from the mechanized apocalyptic dirges of Godflesh and Author & Punisher to the cryptically ambient Lustmord and Lab Report, to the gritty alt. rock stylings of Pop Will Eat Itself to the harshly electro/industrial vibes of Human Traffic, Severed Heads, and Front Line Assembly. It seemed a combination that shouldn’t necessarily work if not for the eclectic tastes of the performers and audience alike, but despite this (or perhaps because of it), ColdWaves IV proved to be, in this writer’s mind, the most spiritually and emotionally engaging entry yet… but we’ll come to that later. 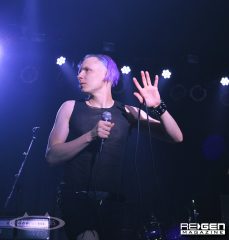 As with ColdWaves III, a Kick-Off party began the proceedings; a smaller, slightly more intimate showcase to build up the anticipation for the main event, prepping the crowd for the enjoyment to ensue. This year began with the harsh electro/EBM/dubstep of Atlanta’s Die Sektor. The noise begins, a rising cacophony of hazy, bleak ambience… and then the percussion hits as Scott Denman all but punishes the gear, banging away on the drum pads to build to an intense crescendo of four-on-the-floor industrial madness. Edwin Alter then takes to the stage, howling through the mic with his signature combination of overdriven EBM fury and his natural tonality to convey subtle melodies, making for a distinct effect that has differentiated Die Sektor from many other bands in a similar style. Performing a range of songs across the band’s three albums, with “Accelerant,” “Blood I,” and new track “Long Nights” being highlights, making for a nice preview of what Die Sektor will be bringing to North American audiences on the impending Prophecy tour with God Module, these two noisemakers know how to get the crowd revved up, all the while offering just enough melody to shine through the electronic chaos. 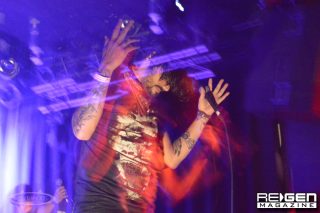 Next to hit the stage was the digital hardcore assault of Seattle’s Rabbit Junk, with Cyanotic’s Sean Payne, Chris Hryniewiecki, and Kevin Barron acting as onstage support. Ever the musical enigma and blending so many disparate elements of industrial, hardcore punk, metal, and all points in between into an anarchic yet cohesive whole, Rabbit Junk demonstrated an abundance of pure energy onstage with tracks like “Pop that Pretty Thirty,” “Crutch,” “WDKYWMYAK,” and “Break Shins to This” working and riling the crowd up with each beat and distorted emanation roaring from the speakers. From the vocal interplay between front man JP Anderson and Nadia Garofalo – with some appropriately acerbic backing from Payne – blasting out a mix of raging verses and undeniably catchy choruses, to the gritty wall of noise created by Hryniewiecki (wielding Jamie Duffy’s blue Schecter), the band made its virulent mark on the whole weekend in fine form, concluded by a performance of Cyanotic’s “Signal the Machines” and “Alt.Machine.” Suffice to say, anybody who may not have been a fan of Rabbit Junk before this performance certainly had to have become one after so vicious, so abrasive, and so powerful a performance as this. 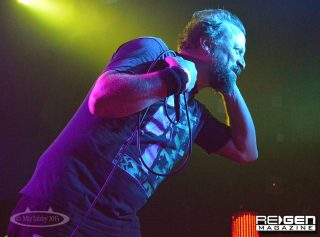 A familiar introductory soundscape begins to emanate from the speakers – the swiveling noise of “Initialize Transmission” like a mechanical breathing apparatus, and the audience is already prepared for the impending performance… a full live rendition of one of the industrial scene’s most revered and enduring albums: Acumen Nation’s Transmissions from Eville! 20 years since the album’s release, this night marks a special celebration of what was for many Jamie Duffy’s first ineffaceable mark on modern music, evoking a mixed set of emotions as Acumen Nation takes to the stage to perform the album in full for the first time without him since 1995. Presented in one of the group’s original configurations of Ethan Novak on drums and Greg “Nez” Lopez on bass, Jason Novak’s signature vocal screech blistering and bellowing through the mic as he and Brian Elza launch the onslaught of dynamically scathing yet melodic guitar riffs, the album progresses as seamlessly and as venomously with “Gun Lover” immediately grabbing the crowd with its signature chant of “I don’t fucking care!” 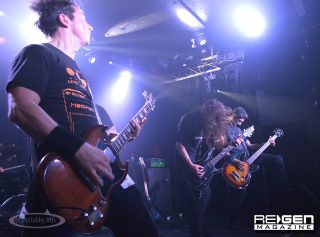 By the time the band reaches “Father in the Wall,” the onstage lineup has begun to shift, with Ethan switching to guitar as longtime drummer Dan Brill and bassist Eliot Engleman take to the stage, pummeling out the machine gun riffs and beats of “NoArmsNoLegs” and “Achorite,” all delivering the mechanical metal barrage that is Transmissions… To say that the crowd could not be happier would be an understatement as the sounds of cheering and roaring helps to bring each track to life. A clear sense of reverence and remembrance felt by both band and audience was absolutely palpable, right through to the final notes of “Sutures” and “Finalize Transmission.” But things didn’t end there – how could it when it was so clear that everyone wanted more? And more did Acumen provide by way of an encore that included such longtime favorites from across the band’s catalog like “Ventilator” and “Liquid Hater.”

The smiles were abundant, the good vibes permeating throughout each attendee, the Double Door begins to wind down with the bands drenched in sweat and fevered elation, the audience’s ears ringing from the delightful noise, and just across the street at a swank little club called Debonair was NEO, Chicago’s foremost industrial scene night. Everyone at this point begins to migrate to Debonair to partake in booze, ’80s music, and memories, still coming down from the unabashed high that was the ColdWaves IV Kick-Off party… and this was only the first night, with more to ensue for two more nights for the main events. Beginning this year’s event with a bang and a smile, the emotional impact of ColdWaves was only starting to seep into people’s hearts and thoughts; despite his absence in body, his presence in spirit could be felt with each note as his band mates blasted out the album that introduced Jamie Duffy and Acumen Nation to the annals of industrial/rock, supported by two of the current scene’s most stimulating acts!