Clint Carney might be a familiar name – or at least, it should be. For over 20 years, Carney has been making art in a multitude of mediums and under a variety of names. He plays keyboards and does backing vocals for Imperative Reaction and God Module, is the front man for Fake, and still finds time to compose the music, write the lyrics, and sing vocals as System Syn. While many will recognize Clint Carney from his musical endeavors, there’s far more to his abilities than just music. 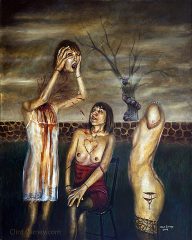 “I love making art in any form,” the man says, as Carney’s artwork has been displayed in galleries around the world and can even be purchased from his website – dark, suggestive, and macabre, his paintings may cause discomfort for some as the imagery forcibly exposes the observer to themes of corporeal viscera, modernization, and conflict. The Hyaena Gallery in Burbank, CA describes Carney’s artwork as depicting “a brutal fantasy world where we become the personification of demons, body parts are interchangeable, and self mutilation is both our punishment and our redemption. It’s dark, surrealistic horror art that lies somewhere between ManRay, Hans Bellmer, and the Black Dahlia murder.” Carney’s work was recently shown at a tribute to horror director Stuart Gordon (Re-Animator, From Beyond, Fortress) at The Hyaena Gallery. Additionally, Carney hosts a monthly live art event at the venue, which features special guests, live art creation, and discussions on artistic techniques and practices. 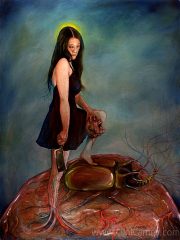 But it doesn’t stop there – Carney also has an extensive number of IMDB credits; most notably, he created the skull-mask worn by Benicio Del Toro in Oliver Stone’s 2012 movie, Savages, in addition to doing props and artistry on such films as Scream 4, Star Trek: Into Darkness, Ted 2, and the 12 Monkeys television series. Carney has expanded his cinematic work by editing, writing, acting in, and producing his own horror movie, Dry Blood, “directed by the amazing Kelton Jones,” due out in 2016. Besides having written and acted in the production, he also created the score; “the score for that film will be all brand new System Syn tracks. They are all instrumental so as not to distract from the film, but I think people will dig it.” In addition, “We’ll be taking Dry Blood on the festival circuit throughout the year, and hope to have a wide release secured later in the year as well.”

Most recently, he directed videos for Mankind is Obselete’s “Lucifer’s Song” and System Syn’s “Daydream from a Deathbed.” Of his work directing music videos, Carney says, “taking on the task of directing music videos has been a really rewarding experience for me. I think with the ‘Daydream from a Deathbed’ video, having been the person who wrote the song obviously helped when developing the concept for the video. But I really do love the challenge of taking another artist’s music and developing that into video form. The challenge there is to communicate the message of their song, but in an original visual way. For me, it’s more about relaying the emotional intent behind the music, rather than a literal translation of the lyrics. The most recent music video that I directed is for the band Mankind is Obsolete. I love the way that one turned out. I plan on directing at least one new music video next year, but I don’t yet know which band it will be for yet. My goal is to make each music video that I do better and crazier than the one before it.” It’s clear at this point that his excursions in the cinematic arts are taking prominence, and rightly so as he demonstrates a clear passion and drive to expand on his creative energies in this medium. “Making movies has become my main drive lately, and I’m having a blast doing it. I feel incredibly lucky that I have a very supportive wife and family and such a great group of friends behind me on these endeavors.”

“Of course, a more standard System Syn album will follow at some point,” Carney says, reassuring fans of his most prominent musical endeavor that more material is in the works. “I’ve been slowly working on it for the last year in my free time, but sadly, free time does not occur very often these days. If all goes well though, I hope to have the next album completed by the end of 2016.” Not to say he won’t still be continuing making movies, stating, “I have several other film projects in the works, but I can’t share any details on those just yet.”

Arts, music, and movies; one has to wonder how Clint Carney keeps up such a prolific and prodigious pace, to which he responds, “Let’s just say that 2016 will be another sleepless year.”