Until his departure in 1999, you could have said that En Esch was the heart of KMFDM, with Sascha Konietzko being the brains. Both are amazing producers and songwriters with a keen sense of how to weave heavy guitar riffs and electronic grooves together. But since the split, KMFDM has evolved towards a heavier and darker sound, abandoning some of the deviant mayhem and fun. Fun was one of En Esch’s contributions and Slick Idiot is all that. The 2012 CLASSICK tour saw the German En Esch and Mona Mur team up as they took their message of artistic rebellion across the USA and Canada with special guest Promonium Jesters. New York City’s famous Stimulate club night proved the perfect backdrop for such an underground party, with people packed into Tammany Hall dressed as their alter-egos, ready to catch Slick Idiot and hopefully hear some rare KMFDM oldies. Weaving through the crowd with a rucksack over his shoulder, En Esch himself seemed like just another fan trying to mingle and catch up with friends. Legendary industrial rockers Hanzel und Gretel were in attendance that night, among others. 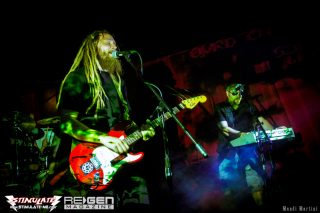 To Promonium Jesters vocalist Ethan Mosely, playing alongside one of his guitar heroes is like a dream come true; “I grew up listening to KMFDM. We went and saw them on the *Symbols* tour in 1997… an absolutely mind blowing experience. And to now have En Esch sitting in my kitchen having a beer, its just like my brain’s exploding.” The Canadians brought it hard on their first ever NYC show with a blistering blend of “psychedelic industrial thrash” that sounded simultaneously spontaneous and precise. Keeping two drummers, three guitar players, and keyboards sounding tight is not an easy task, but Promonium is not a rookie band. “Futurekill” features Mosely’s angry stream of consciousness ranting backed by harsh riffs courtesy of guitarist Tyler Nobel. The sonic mayhem takes several unexpected turns within the same song. Synth player Gregory Stewart Cox skillfully injects electronic and analog noises into the mix in a way that you can tell he is actually playing lead parts, and not just miming. The bass guitar duties were handled skillfully by Dave Miller, providing a good amount of groove and low end. The song “Hard” has a more industrial beat and starts out with looping speech samples over a mechanized beat provided by drummers Mike Adaptiv and Rob Mosely; it was well received by the crowd. Ethan’s high octane vocals on “Skull Duty” bring to mind other great industrial/metal front men like Jaz Coleman (Killing Joke) or Richard Patrick (Filter) only with way more dreadlocks. Promonium’s easygoing stage presence, combined with a deceptively powerful array of talent, won over the crowd and left the stage destroyed. 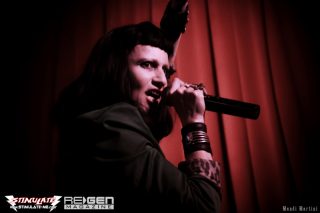 And then after a bit of a cleanup, the stage was set for two enduring musical figures: Mona Mur and En Esch. If you haven’t kept up on the music they’ve been releasing since their team up in 2009, you really are missing out. Their music is not a publicity stunt or last-ditch effort of two former German giants. It’s a synergy of talent and two creative artists that are still exploring themselves unafraid to take chances. After warming up with “Idiot” from 2001’s DickNity, the band dives headfirst into the up-tempo “Hallelujah,” which serves to get the crowd moving. Esch’s eyes and tongue flash decadently as he confesses, “The Devil’s got a hold of me” in his signature raspy growl. The track “I.I.W.I.I.” (It is what it is) keeps the rebellious energy flowing with Esch and Mona’s voices complementing each other nicely. 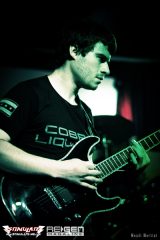 Slick Idiot looked a little different tonight as the great Günter Schultz was missing from some of the early shows on the tour. In his place was the talented young Dan Simones, who was actually found via an internet ad on Craigslist. Also, the multitalented Ethan Mosely of Promonium Jesters handled the drumming duties. It all meshes quite well. Mona Mur does an admirable job as the female vocalist on the Slick Idiot songs, but the strength of her vocal styling is more obvious on her own songs like “Vision & Lies” and “Justice.” Taking the spotlight in her bright green blazer, her dramatic voice and piercing gaze cast a spell over the crowd. Onstage, she seems like the queen of the underworld, in charge of a pack of messy boys. When he isn’t contributing lead vocals, En Esch’s guitar playing is funky and creative and mixes well with the technical skill of Dan Simones, who seems like a clean-cut kid standing next to the 6’6″ Esch, but he holds his own as he churns out industrial riffs like a veteran guitar hero. En Esch fools around with the crowd by playing only the first few seconds of “Juke Joint Jezebel” before pressing stop. He does it twice, toying with the audience, many of whom haven’t heard it played live in many years since KMFDM apparently refuses to play it. But tonight they get to hear it as done by Slick Idiot. The waves of love and respect can be felt radiating to the stage; En Esch’s fans are happy that he’s still kicking ass. 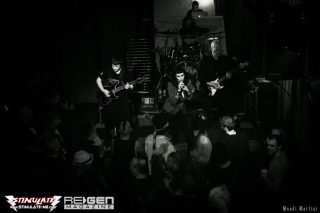 By the last few songs, the show seemed more like a party with Slick Idiot the house band. People were jumping around, many happily drunk, singing along with revamped KMFDM classics like “Don’t Blow Your Top” and “Go to Hell.” The Stimulate crowd cried out for more and the band returned for an encore of “A Drug Against War” and “Make Me Believe.” At the end of it all, En Esch and Mona Mur proved to both old and new fans that even though times have changed, the decadent spirit of industrial will never die…