Since the 2003 release of his full-length debut as Celldweller, Klayton has kept busy with a rather massive outpouring of material, all the while building his FiXT empire from the ground up and setting a hub for artists to release music on their own terms. Besides his Celldweller artist albums and hosting numerous remix contests, he’s had quite a few releases encompassing material written and licensed primarily for soundtrack purposes. With the two Transmission volumes, Klayton maintains his thematic focus upward toward the stars, switching from his EDM/rock hybrids toward a more experimental blend of ambient/IDM that is appropriately cosmic in scope without losing the harmoniousness that has characterized Celldweller’s music from the beginning.

The first volume begins with “Metropolitan” as throbbing bass, pulsating synths, and straightforward beats begin the proceedings with a sense of anticipation and excitement; this excitement gives way to wonder and awe as reverberating pads and glitch-laden synths and beats underscore the vast expanses of deep space. Ech track takes on certain celestial qualities their titles suggest, with the sullen lullaby of “Snowcore” giving the impression of slowly traversing a frozen, twilit tundra, while “Shapeshifting Nebulae” dynamically takes the listener through varying waves of oscillating synths, intricately interwoven layers of frantic percussive and noise effects amid cloudy pads evocative of traveling through starry haze. “The Last Question” with its rubbery synth harmonies is reminiscent of early Autechre, while the fright and subtle terror of the cosmos is conveyed through the offbeat glitches and noises of “Broken Clock” and the groaning distorted drones of “The Descent of King Ghidora,” while “The Halls of Valhalla” is at once soothing and unsettling with its swells of almost vocal atmospheres akin to the whispers of ancient deities. “Daydreaming at Night” ends the first volume with crystalline echoes of guitar and feedback guided by shooting stars create a sense of calm and foreboding at what lies beyond the furthest reaches of space. 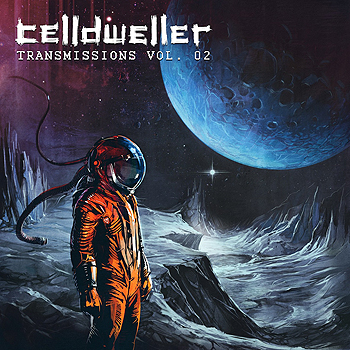 “Acid Bath” begins Vol. 02 in a similar fashion as the first as frantic beats and spastic bass lines create a sense of warped intrigue, charging headlong into the ensuing void. While dramatically different in tone and tempo, “Lost in My Own Little World” ties into Celldweller’s hit “Own Little World,” Klayton’s heavily manipulated vocals singing in tandem with resonant waves of pads and manic arpeggios to truly create a sense of being “Lost in time.” As its title indicates, “Midnight Train” is a highly rhythmic excursion, its steady and almost jazzy beat underscoring oscillating bass to create a rather relaxed and groovy track; the same can be said for “Something for Someone,” its head-bopping disco beat and simply infectious bass line augmented by flashes of ambient light making for one of the album’s more energetically pleasing moments. And then we return to the ambient thrills of “Frequency Scan,” with its droning, resonating stillness adding to a sense of cosmic tension, and “A Storm on Saturn,” upon which fluctuating winds of noisy feedback and overdriven pads moan a haunted hymn of nightmarish interstellar dread. Finally, “Event Horizon” concludes the album with a darkly inviting maelstrom of ghostly ambience, hinting perhaps at further wonders and terrors to be found in the depths of infinity.

With Transmissions, Celldweller plunges the listener headfirst into the immeasurable eons and unfathomable distances of time and space as only he can – equal parts ambient drone and rhythmic IDM, while it thematically ties in with what Klayton has already offered us with Wish Upon a Blackstar and the upcoming End of an Empire, the music takes on a wholly different character less reliant on narrative. Introspective and celestial, Transmissions showcases Klayton’s production skills as well as any of his past releases as well as his versatility as an artist, and while the moods and atmospheres may be a tad esoteric for the casual listener, those with an ear for this kind of sonic exploration will find much to behold on these two volumes.