When MINISTRY first announced the Industrial Strength Tour in early 2020, rivetheads rejoiced as the band would be joined by fellow pioneers of the industrial scene KMFDM and Front Line Assembly. Sadly, circumstances seemingly beyond control necessitated the tour’s postponement to this year, with the supporting slots now filled by heavy metal band Corrosion of Conformity and noise rock act Melvins – a move that upset and confounded many in the scene… but we aren’t going to go into that now as the social media uproar of the months preceding the tour were more than enough commentary on the situation. In the end, the Industrial Strength Tour went ahead – perhaps not quite as planned – and MINISTRY delivered a thirtieth anniversary celebration of the genre-defining game-changing 1989 album The Mind Is a Terrible Thing to Taste. And ReGen Magazine was there to catch it in Baltimore, MD and in Raleigh, NC. 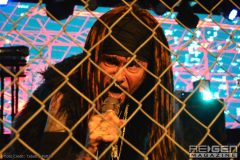 With the band having released the Moral Hygiene album in the midst of the pandemic and the many tour postponements, one can imagine that Al Jourgensen and his cacophonous contingent of musical miscreants would feel an imperative to perform some new tracks along with the requisite favorites. So, it was quite delightful for this writer to hear that MINISTRY stuck to the initial theme of the tour and concentrated the setlist primarily on songs from Mind…, as well as a few favorites from The Land of Rape and Honey and Psalm 69; from the throbbing chug of “Breathe,” “Just One Fix,” and “So What,” to the pummeling whiplash of “The Missing,” “Deity,” and “Thieves,” one could imagine being transported back to the halcyon days of the late ’80s when MINISTRY first thrashed and slashed its way through our speakers. 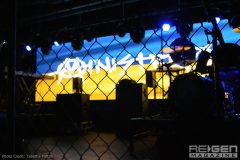 But if that’s not enough to sate the longtime fans, the band also offered up the Pailhead pair of “Don’t Stand in Line” and “Man Should Surrender,” along with a spirited performance of the 1,000 Homo DJs version of “Supernaut,” truly paying homage to the mechanized metallic sounds of old. All the while, the barrage of hyperkinetic imagery projected upon the band kept things in an accelerated state of industrial stimuli, MINISTRY’s logo even embedded upon the Ukrainian flag as a show of solidarity.

Oh, songs from Moral Hygiene did ultimately appear in the encore, which in this writer’s opinion was a smart move on MINISTRY’s part to keep things thematically grounded. Following a visual memorial to fallen comrades from throughout the band’s history like Mike Scaccia, William Rieflin, Joey Jordison, Paul Raven, William Tucker, and Jeff Ward, Jourgensen and company offered up “Alert Level,” “Good Trouble,” and “Search and Destroy,” before concluding with one more bit of history in the form of the Revolting Cocks classic “No Devotion.” 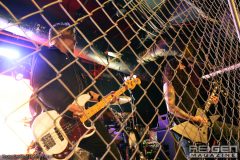 As lineups go, MINISTRY has had its share, but it must be said that the current roster of musicians backing Al Jourgensen is among the tightest this writer has heard or seen. With Cesar Soto and Monte Pittman sharing the guitar duties, both exhibit that often elusive dynamic of precision musicianship and rockstar swagger, their riffs and solos in lockstep with John Bechdel’s steadfast and solid keyboards and Roy Mayorga’s percussive assault. Filling in the bass duties is Paul D’Amour, his steely tone cutting through the mix without overtaking any of the sonic space; indeed, his sense of groove was equal to anything heard by Paul Barker, comparable perhaps only to Paul Raven (hey… could it be that the best bassists in MINISTRY’s history have all shared the same name?), and his simple and unassuming wardrobe belied the depth of his onstage charisma. Speaking of which, ol’ Uncle Al seemed in top form, and though its no secret that the years combined with his infamous excesses may require that he have a bit of help with some vocal and backing tracks, his performance was not lacking in an appropriate amount of vitriol and vigor. 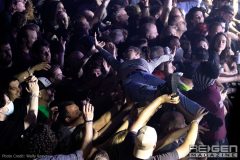 This writer was somewhat amused by the not-so-subtle snub of the large number of people in the audience wearing KMFDM and FLA T-shirts, while also engaging in conversation with someone about Buzz Osborne’s hair style and his long friendship with Jourgensen; this fellow seemed particularly appreciative of Melvins’ diverse musical style, which although not to my specific tastes or generally in the purview of ReGen, was a refreshing outlook that made for a pleasant bit of in-between-set chatter. 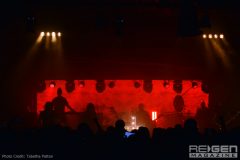 Would the Industrial Strength Tour have been better with KMFDM and Front Line Assembly? Well, ReGen says yes, and one can only hope that Uncle Al doesn’t burn too many more bridges from here on out… but this is not to decry MINISTRY’s efforts to at least hold true to its own approach, keeping the set focused on the industrial past. And yes, the cage, the garish crucifix on the mic stand, Uncle Al’s finger-waving, boot-stomping, throat-growling, dreadlock-flinging presentation… it was all trademark MINISTRY done rather well. With the current lineup apparently working on a follow-up to Moral Hygiene, along with several festival appearances and the European Moral Hygiene Tour taking place this autumn, one has to give Jourgensen and his crew credit for keeping the fires burning after so many decades.