The Industrial Strength Tour that had initially been planned for 2020 did finally happen this year… just not in its original configuration as KMFDM had ultimately been left off the final roster after two rescheduling attempts. That’s not to say that Käpt’n K and company didn’t do well to maintain a relatively active presence during the pandemic – there was the IN DUB collection in 2020, the previously unreleased APART album from 1991 and a new mix of “Juke Joint Jezebel” in 2021, vocalist Lucia Cifarelli revealed her long awaited sophomore solo effort I Am Eye, guitarist Andee Blacksugar had released several albums in 2020 under his Black Sugar Transmission moniker, and finally the release of HYËNA this past September. By then, it had been five years since the Ultra Heavy Beat graced the shores of North America with a tour, so anticipation from the fans was certainly high when the dates were announced for the 2022 leg of the HYËNA: Live in the U.S.S.A. Tour, with friends and fellow industrial rabble rousers CHANT joining for their third stint supporting KMFDM. 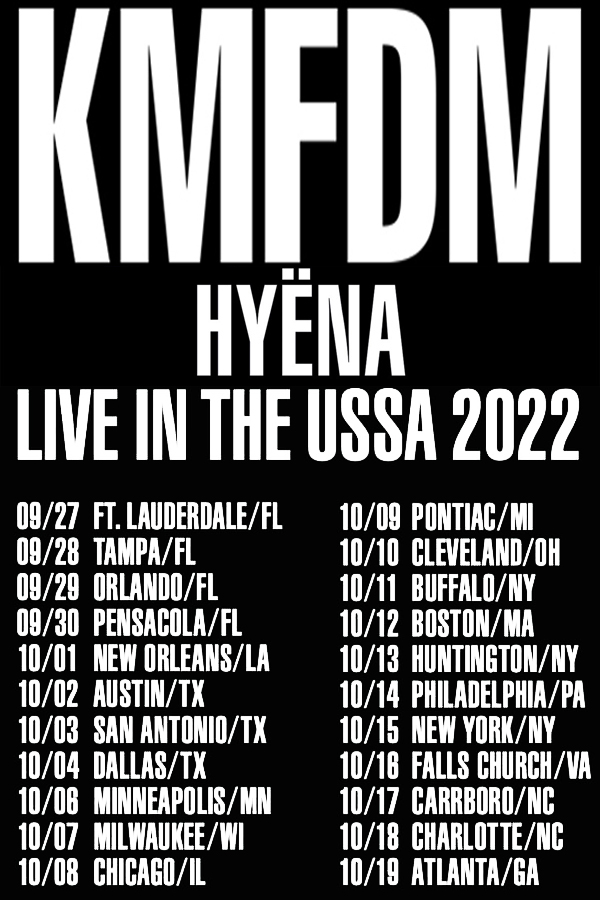 Mother Nature has often proven to be a cruel mistress in her indifference, for although the tour began on schedule in Fort Lauderdale on September 27, the following dates in Florida were suddenly cancelled thanks to Hurricane Ian. Of course, such last minute changes in a tour itinerary are not unusual in the grand scheme, but such inconveniences take on added significance with the immigration policies of the past and current administration, as well as health concerns in the wake of the pandemic; as an international band, KMFDM is subject to these policies, as the Käpt’n had stated in ReGen‘s most recent InterView, “Chaos with the airlines, rising fuel costs making road travel nearly unaffordable, where shipping items from A to B used to comparatively cheap, it’s now a major expense, lax or no COVID regulations at all…” So, one can imagine the tremendous pressure both band and crew were under to conduct the tour in the first place, let alone continue after such a sudden and unforeseen circumstance as a hurricane. But KMFDM has never been in the habit of letting the fans down, and by the time ReGen got to catch up with the tour in Pennsylvania, Virginia, and North Carolina, it was clear that things were running on all cylinders.

There’s a reason that CHANT has opened for KMFDM multiple times now – helmed by Bradley Bills, the band’s tribally infused, percussively focused industrial/rock assault remains a spectacle best experienced in the live setting. The rig and general layout changes, the sound evolves, but the essentials of sharp lighting and drums, drums, and more drums remain at the forefront of CHANT’s presentation, with Bills singing in his seething yet melodic tone while bashing away at the standing kit, occasionally shifting to the keyboard stand as the songs require.

Meanwhile, Alvin Melivin wails away on the guitar, sometimes accompanying on his own drum like a seasoned Taiko performer, lights shining directly in his and Bills’ faces to add to the visual splendor… but if that’s not enough, Melivin takes to an electric cello for a couple of songs, adding even greater depth to the sonic barrage. I have to admit to a sense of joy not only at seeing and hearing CHANT live yet again, but at the number of people asking me excitedly, “Who is this band?!,” and boy, did I exalt in their discovering the band much as I did when I first saw them with KMFDM in 2013.

Over 38 years of conceptual continuity, it’s rather amusing to realize that the band has lasted long enough to have multiple eras, with just as many people now missing Jules Hodgson and Steve White as there are for En Esch and Günter Schulz… well, that is until the opening fanfare of “D.I.Y.” blasts through the speakers – the expectation erodes, the adulation amplifies. Never a band to be affected by age or shallow criticisms regarding the lineup, one has to admire the longevity of the Ultra Heavy Beat, not to mention the energy the quartet unleashes onstage. Sascha Konietzko’s voice and presence is as commanding as ever. Lucia Cifarelli balances grace, sexiness, and fury all in one. Andy Selway hits with sheer battering ram force on the drums. And as he once again fills the role that had previously been relegated for more than one player, Andee Blacksugar’s dexterity and versatility on the guitar is something to behold.

Naturally, the set list focused primarily on HYËNA, with a few selections from more recent efforts – like “Amnesia,” “Hau Ruck,” “Bumaye” – intermingled with some of the obligatory hits… because let’s face it, it wouldn’t be a true KMFDM show without “Light,” “A Drug Against War,” “Megalomaniac,” “Godlike,” or “Son of a Gun,” would it (although I’ll admit to wishing that just once would CHANT join KMFDM onstage to perform the remix of the latter song that appeared on the 2017 ROCKS collection… but I digress).

Still, the pure punk vitriol of “Blindface” and “All 4 1,” the bluesy rock power of “Black Hole,” and the anthemic bombast of “Liquor Fish & Cigarettes” and “HYËNA” all exhibited the kind of vitality one expects from a younger band. Rapper Andrew “Ocelot” Lindsley opened for KMFDM on the Hell Yeah Tour in 2017; this time, he joined the band onstage for the hip-hop-injected one-two punch of “Rock ‘n’ Roll Monster” and “K-M-F,” while the guttural industrial/metal of “Paradise” gave way to the chill of the closing dub section to bring the show to a majestic close.

Oh, and before you go on thinking that only KMFDM loyalists were in attendance… the audiences in Philadelphia, Falls Church, and Carrboro were as diverse as one should expect from a band that has left very few stylistic stones unturned over nearly four decades – young and old, newcomers and veterans alike. “This is my first time seeing KMFDM.” “Oh, I’ve lost count of the number of times I’ve seen ’em. I think you’ll love it!” And if the roaring volume is any indication, love it they did! Despite the difficulties that reared their ugly heads, KMFDM rose to the occasion and made good on the axiom that they will never stop. For those on the West Coast of North America, as well as in Europe, prepare yourselves for 2023!