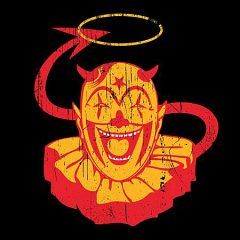 With Alleluia!, the second entry in The Devil’s Carnival series, the format has been extended to a full-length feature continuing where the first episode left off with Lucifer’s declaration of war against God, his carnival of malicious miscreants and sideshow sadists reveling at the impending battle – the first shots fired being the return of several damned souls to overrun Heaven. However, to simply release such a staple of the subculture to the unprepared and uninitiated masses would have likely yielded such disastrous consequences as has often befallen such endeavors – failing to reach its intended audience due to underexposure and limited availability; while such circumstances guarantee its status as a cult hit, Zdunich and Bousman were not content to take this lying down. As with Repo! and the first episode, they have taken Alleluia! on the road, touring the country and bringing the movie to the audience personally, along with a few surprises that hearken back to those filmgoer experiences of a bygone era. ReGen was fortunate to catch the premiere of Alleluia! The Devil’s Carnival at the Landmark Theaters in the Harbor East area of Baltimore, MD on the relaxed Sunday evening of September 6. 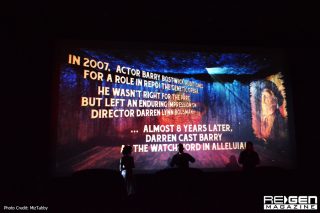 As the lobby filled with an assorted ensemble of goths, cosplayers, steampunks, theatre nerds, and all points in between, the V.I.P.s were treated with a personal greeting from Zdunich and Bousman prior to the movie’s opening, complete with a special introductory Q&A and even a tutorial on how to dance “The Ark” from the movie’s second number, with the stipulation that they would dance along to leave the later “plebeians” (as hostess Stephanie referred to those not on the V.I.P. list) in confusion. The rest of the crowd is finally allowed entry, snippets of Saar Hendelman’s musical score reverberating through the theater as the screen projects a reel of trivia pertaining to the movie, making it clear that the carnies have taken over the Landmark for the evening. 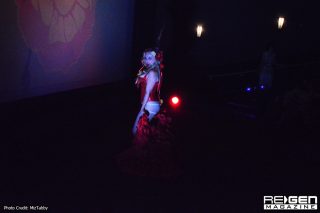 After a few moments, the lights start to dim, but not for the movie… not even for the opening trailer for Zdunich’s next project, American Murder Song. No, the lights dim for the opening sideshow attractions, the first lifting a pair of ball-and-chains from his ear piercings as his lovely compatriot rests upon his shoulders, the second a burlesque striptease with the performer adorned in a fake beard; needless to say, it was quite a spectacle to begin the proceedings, garnering quite the cheers from the anxious crowd and setting the stage for the darkly delights about to ensue. 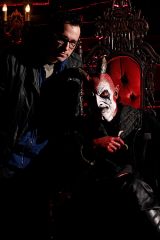 The stomping beat begins, Lucifer’s exuberant and diabolically tinged baritone bellows “Shovel and Bone,” the boisterous image of a locomotive filled with disallowed souls racing to Heaven’s gates with the sultry and sensuous accompaniment of damned soul Ms. Merrywood making for a striking opening, the chants of “Alleluia!” resonating in the background and setting the stage quite marvelously. From here, it becomes clear that though still driven heavily by the musical numbers, this movie makes a greater and more effective use of actual spoken dialogue, allowing for the tragic elements of the story to stand out. As in The Devil’s Carnival, the story is underscored by Lucifer’s relating a moral parable from “Aesop’s Fables,” relating to a primary character’s sad origins and fulfilling Bousman’s description of the movie as “pulling back the curtain on Heaven,” revealing “God and his angels are whole lot darker than Lucifer and his carnies,” complete with Lucifer mockingly retorting, “And they think I’m the cruel one!” In Alleluia!, Heaven is depicted in stark contrast to Hell’s carnival, recalling the Golden Age of Hollywood, run by Heavenly Productions Incorporated and presented as a grand lunatic ‘40s radio show; strict to God’s unquestioned rule and enforced to an almost sadistic efficiency. Needless to say, God is none too happy with Lucifer’s overcrowding of Heaven with returned souls, ordering his favorite Agent in no uncertain (and downright foul-mouthed) terms to dispatch the devil and remind him “who’s in charge.”

To say much more about the plot would require spoilers, but it can be said without revealing too much that the story is as open-ended and ambiguous as the first episode; given the cheers of the audience upon the conclusion of the end credits, it’s clear they wanted more. And why not? The music and songs were as eclectic and as varied as the eminently capable cast that performed them, blending an almost vaudevillian flare with a sense of darkly modern panache that is as otherworldly an artistic combination as one can concoct. Though not as steeped in the goth/industrial aesthetic as Repo! was, The Devil’s Carnival is no less enticing in its gloriously jazzy and subversive style. Where else but in a Zdunich/Bousman production can one see staples of the underground music scene like Emilie Autumn, MSI’s Jimmy Urine, rapper Tech N9ne, and Skinny Puppy’s Nivek Ogre sharing the stage and screen with Broadway superstars like the original Jesus Christ Superstar Ted Neeley, The Rocky Horror Picture Show‘s Barry Bostwick, and Rent‘s Adam Pascal? Where else could one see the renowned Paul Sorvino, whose image is synonymous with the classic mobster (a la Goodfellas or Dick Tracy), singing in the deranged role of God with such operatic bravado and magnificence? Where else could one see David Hasselhoff depicting the suavely hedonistic Designer with such face-painted flamboyance the likes of which haven’t been seen since Dean Stockwell’s turn as Ben in David Lynch’s Blue Velvet?

Through and through, Alleluia! is cast to perfection, with Urine and wife/Morningwood vocalist Chantal Claret being especially noteworthy in their depiction as the pair of Keystone Cops-inspired Translators, and Tech N9ne’s appropriately surrealistic portrayal of the almost priestly Librarian is unforgettable as his rapid-fire delivery in “Hitting on All Sevens” marks one of the movie’s most accomplished numbers. From the start, Neeley demonstrates that despite his advanced age, his voice is unparalleled as he belts out a manic and inspired performance as the Publicist on “All Aboard (Everybody’s Doing the Ark),” and there was a certain delight in seeing almost everybody from the V.I.P. segment of the crowd dancing “The Ark” in unison as the hosts insisted upon in the night’s beginning, while Ogre’s painfully brief and arresting appearance as the devious and mischievous Twin steals the show, just as it did in the previous installment.

Barry Bostwick has his creep factor amped up to 11 as his character of the Watchword haunts Heaven’s halls, taking photographs of every violation of holy mandate with an almost sleazy voyeurism reminiscent of ‘20s/’30s crime scene photographer Arthur “Weege” Fellig, his gravelly hums somehow reminding me of the Skeksis Chamberlain from Jim Henson’s The Dark Crystal (an odd association admittedly, but one that made his presence all the more imposing in this writer’s eyes). The Butcher Babies’ Carla Harvey and Heidi Shepherd join Brea Grant as the farcical bosomed trio of The Rosy Bayonettes, their musical contribution playing background to Autumn’s climactic turn as The Painted Doll in “Hoof and Lap,” and inspiring Dayton Callie’s Ticket Keeper to deliver one of the simplest yet strangely funniest lines in the movie. Oh yes, the humor, for despite the dark undertones of the imagery and story, there is no shortage of laughs to be found, from Heaven’s skirt-adorned Glad Hands to Marc Senter’s comically plastic-haired bad boy Scorpion. However, nothing in Alleluia! produced more laughs than a flashback sequence in which Lucifer once donned what can only be referred to as a porn-stache; an image that went so far as to cause one denizen to ask of Zdunich after the movie, “What’s up with that?” 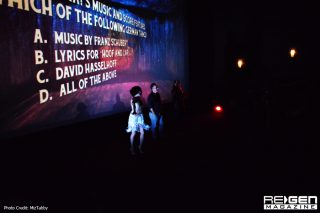 As stated, the end of Alleluia! leaves the door open for future installments, and Zdunich and Bousman did express their hopes in the closing Q&A to take The Devil’s Carnival in an even more episodic direction, perhaps as a television series. To do so, as the creators stress to the audience, requires time and financial resources that can only be obtained by virtue of the fans’ support in spreading the word and sparking enough interest to go bigger and better. On a budget of approximately $500,000 and shot over the course of two weeks, the very fact that such a cinematic experience as Alleluia! The Devil Carnival even exists is nothing short of miraculous, blasphemous as that may be to say in light of the subject matter. It can be said that sitting in the Landmark Theater and viewing the midnight premiere of so strange and seductive a musical with its sideshow supplements and audience interaction was a truly singular and above all entertaining experience that is best described in the words of Lucifer himself – “Let us remember the past so that we may better destroy the future.” A soundtrack worth every musically malicious moment, a movie well worth the price of admission; Huzzah and Bravo, Terrance Zdunich, Darren Lynn Bousman, and the cast and crew of Alleluia! The Devil’s Carnival! 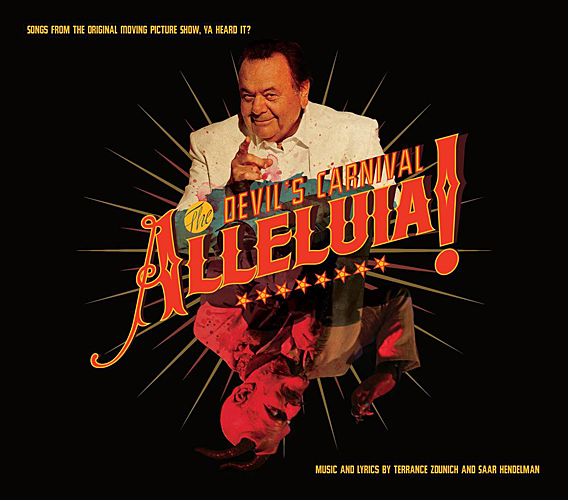