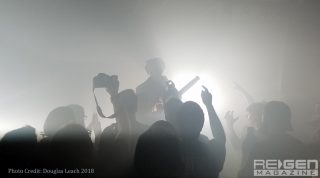 Having entered the venue just as Street Sects started, no setup was seen, which helped the aesthetic of the band’s performance – a solid wall of fog, horror movie samples, and strobe lights. A lot has been made of the intensity of Street Sects’ live show and it did not disappoint. Most of the time, one could not see anybody up on stage and it wasn’t entirely certain if one could even see all of the people standing by the stage. Just to drive the point home, vocalist Leo Ashline managed to walk off the stage with a chainsaw without much of anyone noticing. He circled around to the back of the crowd, where he stood for a few seconds before screaming and revving up the chainsaw. There were some small subtleties within the music and vocals, but they were completely drowned out by everything else that was happening. Street Sects shows are not for everyone, especially those with epilepsy or those with a low threshold for sensory stimulation. 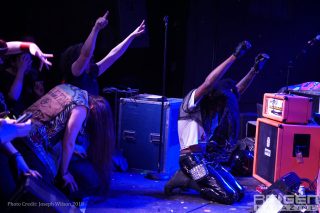 Ho99o9 has often been compared to Death Grips, and while part of that is true, especially on the duo’s albums, the band comes off live as hardcore punk similar to Suicidal Tendencies, the Cro-Mags, and the other frequently made comparison, Bad Brains, that occasionally slowed down into the realm of hip-hop. The opening song, “Street Power” personifies this juxtaposition, starting off with slower, hard hip-hop style, jumping into the hard punk of loud guitars and shouting. Unlike Street Sects, who had the crowd mesmerized and mostly at a standstill, Ho99o9 had the crowd engaged and rowdy. There was a good sized mosh pit going for most of the show that vocalist Eaddy jumped into multiple times. The band also consists of vocalist TheOMG, who ran the sampler, and drummer Ian Longwell. Even though nobody onstage was playing the guitar or synth parts, it didn’t matter; the energy of the live drums and raw vocals made for a complete live experience. 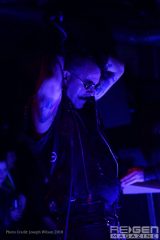 3TEETH vocalist Alexis Mincolla had mentioned that Ho99o9 was a hard act to follow and he is correct. If a band didn’t have its live act together, the performance would come off as boring by comparison to Ho99o9’s high energy. Luckily, 3TEETH has been perfecting its live show for a few years now and the band can hold its own. The set opened with the slow but heavy “Divine Weapon,” and the group continued to go back and forth between songs from the first and second albums. Since 3TEETH’s last show at the Riot Room about a year-and-a-half ago, the band has added a live drummer, which allowed Andrew Means to switch from playing electronic drums to a fulltime keyboardist. Means along with Xavier Swafford gives the group two dedicated keyboard players, which is a rarity for an industrial/metal band. 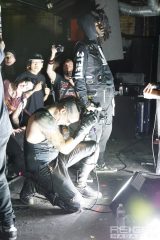 Also, vocalist Mincolla has become chattier and more mobile over time. Last time, this writer doesn’t remember him talking to the crowd much and he stood in the same spot most of that show. This time, he engaged in more stage banter and moved around the stage, proving that he is fitting into the role of a personable front man well. Also notable is that his vocals seemed more natural and unprocessed in comparison to previous tours, but as the band mentioned, this was its twenty-sixth show on this tour and one could tell it was wearing them down by this point. It didn’t affect the performance, but in between songs, signs of fatigue were clearly visible. For the last song of the night, 3TEETH brought Ho99o9 back on the stage to perform one of their two songs together. During the discussion with the crowd about which song to play, someone onstage could be hear saying, “Fuck it! Let’s just play ‘Lights Out,'” which proceeded to be the last song of the night.


Unfortunately, ReGen was not able to make it inside in time to catch the first band, Kansas City’s own Razorwire Halo, a band that normally puts on a very visual live performance with multiple screens and projectors. But from the acts that were witnessed, high energy, art, and talent were on full display.